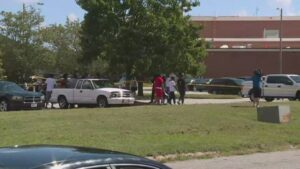 The shooting happened just after 11:30 a.m. at Heritage High School in Newport News.

At a 1:30 Eastern Time news conference, Newport News police said the suspect was not in custody.

Parents and mental health workers started arriving at the school.

One mother said her son was near the shooting. She said, “Nerve-racking, coming down Jefferson seeing all the SWAT cars coming down. Very traumatic, very traumatic. He said he was really close to the gunshots too. He said he’s never been so scared.”

Two other students were transported to the hospital with non-gunshot-related injuries.