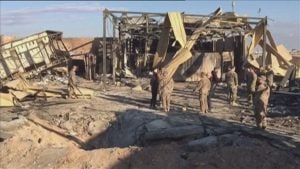 Journalists got their first close-up look at damaged U.S. facilities at the base.

Large craters could be seen in the ground as well as the rubble of destroyed Buildings.

The base in Iraq’s western Anbar province is a sprawling complex about 110 miles west of Baghdad. It houses about 1,500 members of the U.S. military as well as coalition forces.

The base was hit by a barrage of Iranian missiles on Wednesday.

After getting advance warning that allowed them to take shelter, no U.S. soldiers were killed.

The attack was in retaliation for the U.S. drone strike that killed Iran’s top military commander.