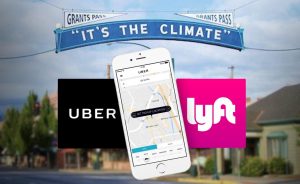 GRANTS PASS, Ore. – Uber and Lyft drivers based in Grants Pass are reportedly operating without the city’s approval.

A news release from city officials states the following in part: “It has come to the City’s attention that two online ride sharing companies have recently begun operating in Grants pass without the proper licensing from the City. The public should be aware that the City has not yet licenses these online ride sharing companies or any drivers that have agreed to offer taxi services through these online companies.”

City officials go on to explain there are numerous regulations related to taxi drivers in order to ensure the public’s safety.

According to the city, any drivers operating for Uber and Lyft within Grants Pass qualify as taxi drivers under city code. If they’re operating without a taxi permit, they could be cited for a code violation.

The city has started the process of reviewing current taxi regulations. A closed-door meeting will be held on January 2 to review permit regulations. Public comment on the issue will likely occur sometime in the future.