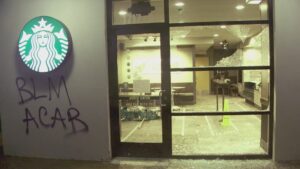 According to the Multnomah County Sheriff’s Office, some at the march broke windows at the public safety office and a nearby Starbucks.

Portland State University Chief of Campus Security Willie Halliburton said, “We’ve done everything that we need to do to make sure this is a peaceful campus. We’ve listened to our community. They wanted unarmed police officers. We’re working toward that goal. And to see that people have come down here and basically violated our university, even though we’re trying to do the right thing, it really disappoints me.”

According to the sheriff’s office, authorities arrested at least two people.