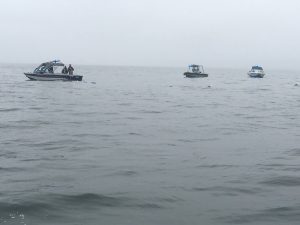 Update (07/21 11:00 a.m.) — Search and rescue crews have found the wreckage of a plane that went missing off the coast of Brookings. Curry County Sheriff John Ward said the remains of one person were also found. The individual has not yet been identified.

Update (07/20 5:00 p.m.) — Search crews have found clothing and parts from the plane that went missing near Brookings.

Curry County Sheriff John Ward said the pieces they found were mangled, indicating the plane may not be intact. That may also explain why the sonar search hasn’t shown one large piece of the aircraft.

Sheriff Ward is expecting the search to continue on Thursday.

Brookings, Ore. – Divers are set to head into the water again on Wednesday to search for a single-engine Cessna that went missing off the coast of Brookings.

The Curry County Sheriff’s Department said crews have marked a location of interest.

The plane was carrying three Grants Pass residents that went into the ocean the night of the Fourth of July.

Sheriff Ward said he is now rounding up divers so they can head back into the water Wednesday and investigate the location of interest.