Houston, Texas (KTRK) – First, a gunshot to the ceiling sends both customers and cashiers running.

Two men rush in but a cashier manages to shut and lock the door just in time. The men try everything but can’t get through.

While they’re at the front, another armed man heads to the back of the store. He puts a gun to the head of a customer.

The customer looks like he’s practically begging the gunman to take his wallet and he’s safe. But the gunman isn’t done he, too, tries to break through the door. But even his bullets and kicks are unsuccessful.

Seconds later all three are gone. Cashier Noor Kadiwala said, “If I was meant to die that day, I would’ve been dead, but it’s all god’s grace — saved all of us.

In the beginning of the video, Noor Kadiwala runs to the room and shuts the door. He then opens it for another cashier, then closes and locks it again less than half a second before the robber arrives. That half a second may have made the difference between life and death. “At that point in time, nobody thinks, it just happens,” said Kadiwala.

Ariel Guerrero, a customer at the store said, “I couldn’t believe that somebody opened the door to let her in. You could’ve been so scared that you’re like you know what the door is closed, it’s staying closed, I don’t care.”

Kadiwala said, “I was just down on the floor, crawling back and forth, thinking if I’m lucky enough to dodge the bullets. They even shot through the door and two bullets passed right next to my face.”

Outside cameras captured the men coming and going in a green Mitsubishi. “From now on we have to be careful, watch the surroundings and customers. There is no control. Anything could happen,” said Binod Khanao, the store manager. 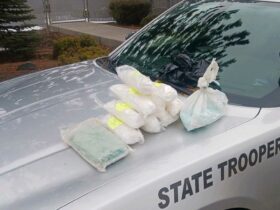