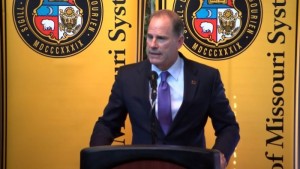 Missouri — (NBC News) The president of the University of Missouri system resigned Monday following weeks of protests over his handling of allegations of racism on campus.

News of the resignation spread quickly across the campus.

“I think it was longtime overdue,” said student Justine Johnson. “I think there’s been a lot of racial tension, and I’m glad that something has finally been done.”

Students and faculty were angry after they said Presidnet Tim Wolfe failed to react quickly or strongly enough to alleged acts of racism on campus.

The school’s football team threatened to boycott Saturday’s game, student’s staged sit-ins and a graduate student was one the eighth day of a hunger strike demanding Wolfe’s resignation.