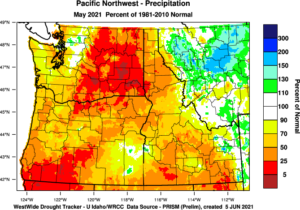 John Saltenberger, the Fire Weather Program Manager at the Northwest Coordination Center in Portland, said the fire danger is setting up to be above average for the region.

“There is already a drought in place in southwestern Oregon and it’s a worsening drought,” he pointed out. “I don’t see any relief in sight until at least winter.”

Saltenberger said he looks at expected weather to tell when a situation is lining up to make larger fires possible. “We are already starting off with record values for June (high fire danger, low humidity),” he said, “so I am assuming, with the weather I see coming, that there is a high likelihood that it will continue through July and August.”

Saltenberger noted parallels between this June and the summer of 2015, one of the busiest fire seasons of his career. He said he has a gut feeling this will be a critical fire season in southwest Oregon. He encourages everyone to have an evacuation plan.