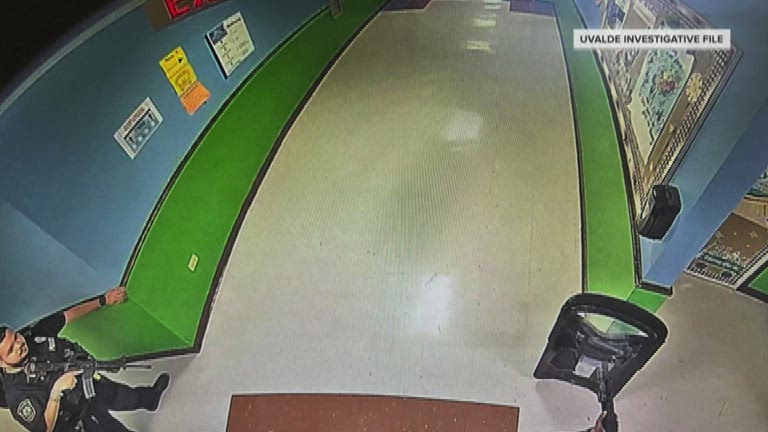 UVALDE, Texas (NBC) – There are stunning new details in the investigation into the school shooting in Uvalde, Texas that left 19 children and two teachers dead.

A new image from inside the school is shedding light on how well-armed officers were and still did not storm the gunman for more than an hour.

It’s the first look inside Robb Elementary during the Uvalde massacre.

The still image comes from surveillance video reviewed by the Austin American Statesman but not confirmed by NBC News.

It appears to show multiple officers armed with rifles and at least one ballistic shield in a hallway 19 minutes after the gunman started shooting. That’s according to the Statesman’s review of materials.

AAS reporter Tony Plohetski said, “Investigators really believe at this point, based on my understanding, that that was certainly enough firepower to try and take on the gunman.”

So why did officers wait nearly another hour to storm the classroom? Texas State Senator Roland Gutierrez (D) said, “Whether you have the equipment or not, you just go in, and that never happened here.”

Separately, the Texas Tribune released a detailed timeline overnight based on video footage and investigative materials not confirmed by NBC News.

According to that report the shooter “opened fire” at officers closest to classrooms 111 and 112.

“We all have pistols,” he said, according to a transcript reviewed by the tribune “and this guy’s got a rifle.”

Texas Tribune Editor-in-Chief Sewell Chan said, “The question of why they were not directed to go in and who should have been giving that direction? I think those are questions that the investigators state, federal and local are going to be focusing on for a long while.”

Victims’ families demanded accountability at a school board meeting in Uvalde, including the daughter of teacher Irma Garcia who was killed and Joe Garcia who died of a heart attack days later.

A member of Garcia’s family said at a Uvalde house and school board meeting, “I need you to know that the horrifying manner in which my mother was murdered, and taken from us completely shattered our hearts, but made my dad’s stop. The pain of losing the love of his life, his high school sweetheart, was too much for him to bear.”