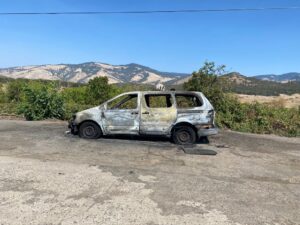 Greensprings Fire said a vehicle was parked along Highway 66 near milepost 6.5 when it was deliberately set on fire about half-an-hour after the Almeda Fire started in a north Ashland neighborhood last Tuesday.

When first responders arrived at the scene near Emigrant Lake, there was reportedly one person near the vehicle, which was fully engulfed in flames and had a propane tank on top. According to Greensprings Fire, that person told firefighters there was a law enforcement investigation underway. Greensprings Fire didn’t know if that person was taken into custody.

The Jackson County Sheriff’s Office said Oregon State Police is investigating the incident. KOBI-TV NBC5 reached out to OSP for more information but we haven’t heard back.

Ashland Police Chief Tighe O’Meara said he’s aware of the incident, but he also stated he has no reason to believe it’s connected to the Almeda Fire.