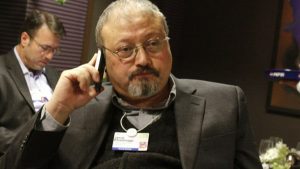 The case continues to cast a shadow over the international standing of Crown Prince Mohammed bin Salman, whose associates have been sanctioned by the U.S. and U.K for their alleged involvement.

Monday, Saudi Arabia handed out what they say is final verdicts to eight people. For their roles in the killing of Khashoggi. They received sentences of between seven and 20 years.

Khashoggi was killed inside the Saudi consulate in Istanbul in 2018 when he went inside to apply for a marriage license.

A 15-man hit squad from Saudi Arabia is believed to have killed and dismembered him inside that consulate while his fiance waited outside, growing ever more concerned about his whereabouts.

We don’t know the identities of any of the eight people who were sentenced, but none of them were thought to have masterminded this plot and there are still lingering questions about the role of Mohammed bin Salman. At the time of the killing, some western governments pointed the finger at him.

Even now, two years later, Khashoggi’s remains have never been recovered, leaving his sons and his fiance to grieve him with no body.