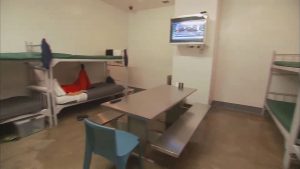 (NBC News) – In California, a new trend in the criminal justice system has some victims of violent crimes outraged.

They’re known as “pay-to-stay” jails. Criminals who can afford them pay to be at these high-end facilities and avoid the harsh realities of larger prisons.

It has amenities you might find at a hotel, but this is not a retreat–it’s a jail. It’s called a pay-to-stay jail. And for California criminals who have money, there are several dozen that offer a way to avoid the often violent, gang-ridden Los Angeles County Jail.

Lauren-Brooke Eisen said, “Those who are wealthy are able to upgrade their facilities to stay at nicer jails than those who are poor who may have committed the same exact crime.”

Among the most popular is one in the surfside community of Seal Beach. $100 a day gets you a semi-private jail cell with access to a phone anytime you want, even cable TV.

Carole Markin, a victim of assault, said, “I was completely shocked when I found out.”

Markin hoped the man who sexually assaulted her would do hard time in prison. Instead he paid thousands to do his time in the amenity-filled Seal Beach Jail.

“It’s an unfortunate reality,” said Markin. “I guess in the system in California which I did not know – if you have money you can have this option.”

Offenders shop around for the jail of their choice. One in Hermosa Beach runs a whopping $251 a night.

But that’s not always the case. An analysis by the Marshall Project and L.A. Times shows that almost 5 percent of those using pay-to-stay were convicted of serious crimes.

Monique Fronti Was devastated to learn the man who had sex with her when she was just 12 years old was able to serve his sentence in one of these private jails.

“They never told me he was going to get privatized jail,” Monique said. “I do not feel like justice was served in this case.”

But the judge has final say. Which means for the privileged, jail comes at a cost that may not always fit the crime.