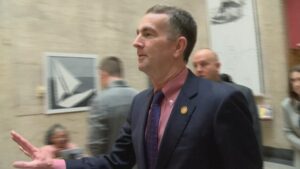 RICHMOND, Va. – Virginia Governor Ralph Northam was identified as a target for a kidnapping plot.

The information was revealed during a federal detention hearing in Michigan for five men accused in the plot to kidnap Michigan Governor Gretchen Whitmer.

Trask did not disclose any further planning that was specific to Governor Northam.

A spokesperson for Governor Northam said his security was alerted by the FBI during their investigation.

Enhanced security measures have been in place for a while and the governor and his family were never believed to be in imminent danger.

The spokesperson also called for the rhetoric coming out of the White House to be stopped, noting that President Trump called upon his supporters to “liberate Virginia” back in April.