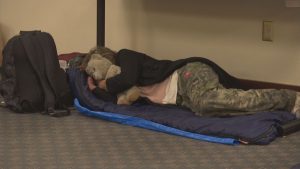 ASHLAND, Ore. — A warming shelter opened its doors on Tuesday night in Ashland for our most vulnerable population.

Organizers say they’re not used to setting up an emergency shelter this early in the year.

After hearing temperatures would hit freezing, they hit the ground running.

The shelter is located at the Ashland Public Library, which offered its space for the first time.

“There’s dozens and dozens and dozens of folks that are living rough and living in cars and struggling with housing,” said Jason Houk, organizer for Southern Oregon Jobs with Justice. “And this storm makes it really hard.”

On Wednesday and Thursday, the shelter will move to the Bellevue Grange.

Friday, it will be back at the Ashland Public Library.