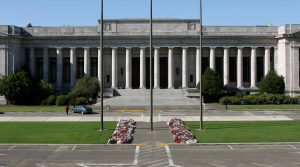 “Discrimination based on same-sex marriage constitutes discrimination on the basis of sexual orientation,” the court held, ruling against Barronelle Stutzman, owner of Arlene’s Flowers and Gifts.

She refused to provide flowers in 2013 for the wedding of two men, Robert Ingersoll and Curt Freed, explaining that as a Southern Baptist, it would violate her religious beliefs and “her relationship with Jesus Christ.”

Both the state and the couple sued, accusing her of violating a Washington law that forbids businesses to discriminate on the basis of several factors including sexual orientation.

She claimed that the law violated her constitutionally protected right of free speech, arguing she wasn’t merely selling a product because her floral arrangements were a form of artistic expression.

But the court said providing or refusing to provide flowers for a wedding “does not inherently express a message about that wedding.” The ruling noted that Stutzman agreed that furnishing flowers for a Muslim wedding wouldn’t necessarily constitute an endorsement of Islam.

Thursday’s ruling also rejected her claim that the law violated her religious freedom. The law applied to the general public and was not targeted at any particular religious practice, the court said.

The high profile case was argued before the Washington Supreme Court last November in a college theater. Several hundred people lined up outside to support Stutzman, a grandmother. Some held signs that said, “Freedom to Create.”

She is represented by ADF, the Alliance Defending Freedom, a legal group that has represented others who assert religious objections to providing wedding services for gay and lesbian couples.

“People with differing beliefs must have room to coexist,” said Kristen Waggoner of ADF. “It’s wrong for the state to force any citizen to support a particular view about marriage or anything else against their will.”

The group said it would appeal the decision to the US Supreme Court.

The justices have yet to decide whether to take up a similar case involving a Colorado baker who refused to provide a cake for a gay couple’s wedding.

In 2014, the Supreme Court declined to take up the case of a New Mexico photographer who refused her services for a same-sex commitment ceremony and was found to have violated that state’s anti-discrimination law.