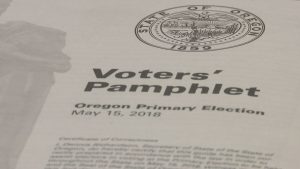 ROGUE VALLEY, Ore.- If you’re a Rogue Valley resident and received your election ballot in the mail, you may notice it’s looking a little slim. With no statewide measures on the November Special Election ballot, it all comes down to local matters.

In Jackson County, the only measure is a change to the county assessor position. In June, county commissioners chose to let voters decide on whether to make it an appointed position and not an elected one.

“I do believe that when you do more professional vetting and you do make more stringent qualifications, you may end up with a better more qualified assessor, and this isn’t an indictment of one specific person, but that just stands to reason,” Commissioner Rick Dyer previously told NBC5 News. This comes after county officials accused tax assessor David Arrasmith of costing the county nearly half a million dollars in tax money, after the Almeda fire. Arrasmith acknowledged the mistake and has apologized.

“Unfortunately, it was discovered that there was an error in the formula on the worksheet, and that caused an error in calculating an adjustment on the tax bill,” Arrasmith explained.  Even if voters want the county to choose its own assessor, they’ll have to wait several years for his term to end.

In Shady Cove, voters will be choosing a new city councilor between Tanda Murders and Paige Winfrey. Neither have previous governmental experience.

In Josephine County, residents will be weighing in on four measures, all having to do with tax levies. One renews an adult jail and juvenile detention five-year local option tax. A second would raise the local option tax for the county’s animal control and shelter services, as the current one expires in June.

The remaining two measures deal with levy renewals for fire protection. Neither firefighter-related levy would result in a tax increase- just a continuation.

“Prior to 2017, response times averaged over 10 minutes. With this current levy, we have folks out the door in under a minute,” Holmes said, adding that that response time stayed low this year despite a near-record number of calls. “It’s a continuation. It’s going to be keeping your firefighters in your fire station, in your community.”

Measure 17-104 would renew a levy for the Williams rural fire protection district. The previous renewal went towards station repairs and upgrades. Fire Chief Rick Vetter says this year’s continuance would help with staffing, and keep the ball rolling on the growth of the district.

“The levy gives us that operating budget, that we can actually buy these new firefighters the equipment needed and get them outfitted,” Vetter said.

In Klamath County, no measures advanced to the ballot, so there is no November Special Election next week. For Jackson and Josephine county residents, ballots must be dropped off by 8 pm on November 2nd in official county drop boxes.