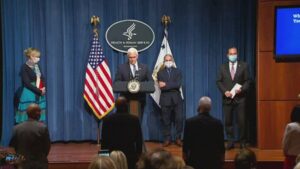 WASHINGTON, D.C. (NBC) – According to a White House official, there has been no formal White House Coronavirus Task Force meeting since October 20.

Since then, the U.S. has repeatedly broken records for daily new infections with more than 120,000 confirmed

Some members of the task force have continued to meet in smaller groups in the last few weeks, but the larger team hasn’t met since two weeks before Election Day.

It’s unclear when they will meet next.

The Democratic ticket has reported regular virtual meetings with their panel of advisers, mostly privately, but at times showcased publicly to drive the message they believe they are taking the crisis more seriously.