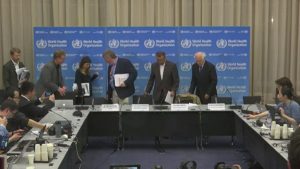 GENEVA, Switzerland (NBC) – The World Health Organization has declared the outbreak of a new virus from China a global emergency after the number of infected people spiked more than tenfold in a week.

The United Nations health agency made the determination Thursday as more cases of human-to-human transmission were being reported worldwide.

Dr. Adhanom stated, “The vast majority of cases outside China have a travel history to Wuhan or contact with someone with a travel history to Wuhan. We don’t know what sort of damage this virus could do if it were to spread in a country with a weaker health system. We must act now to help countries prepare for that possibility. For all of these reasons, I’m declaring a public health emergency of international concern over the global outbreak of novel coronavirus.”

18 other countries have reported cases, as scientists race to understand how exactly the virus is spreading and how severe it is.