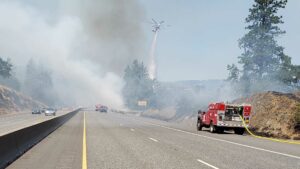 THE DALLES, Ore. – People are being evacuated ahead of a wildfire burning in the Columbia River Gorge.

KGW reports the fire started around noon on Friday eight miles west of The Dalles near the community of Rowena.

The fire prompted the shutdown of a portion of Highway 30 along Interstate 84.