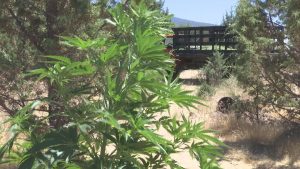 JACKSON COUNTY, Ore. — Farming comes with all kinds of challenges. Not enough rain, too much rain, harmful insects and something Rogue Valley farmers have become all too familiar with: smoke.

“It’s ready to be harvested. There’s no smoke smell to it at all yet,” Nicolaas Vanderwey, NV Farms owner, said.

“If the smoke persists for a couple more weeks, then you’re going to have a problem with harvest,” Vanderwey said.

If the crop is affected, farmers can turn it to biomass as a last resort, which is less profitable. But he says hemp farmers who started harvesting a bit later could have a problem.

“The water is shut off now and they have the smoke to contend with too, so I would say in the valley 30% are at least going to lose their crops,” Vanderwey said.

“Then you just start getting saturation of ash and what really happens to the plants is they start getting suffocated,” Brent Kenyon, Oregon Cannabis Farms owner, said.

Kenyon says marijuana crops can handle a bit of smoke, but once the ash starts to pile on, it becomes a problem. With his harvest just two weeks away, he hopes the smoke is gone for good.

“That’s why everyone is hoping on a little rain right now, I think to wash that stuff off,” Kenyon said.

“This is not the first year we have had smoke during harvest,” Gruber said.

As far as harvesting in vineyards, w maker Brian Gruber says it’s just something you have to adapt to.

“The worst thing you an have is heavy smoke from a fire that is very close to you that is very fresh that lasts a long time when the grapes are ripe,” Gruber said.

With the smoke hopefully clearing out soon, that could make all the difference. But Gruber says no matter what, good wine makers will always find a way to make quality wine. However it does hurt tourism to tasting rooms and productivity in the field.

“The vineyard crews and the farming teams are out picking grapes in the smoke,” Gruber said.

With N95 masks high in demand, the Asante Foundation and La Clinica donated some of their own to farm workers.