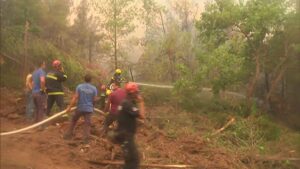 Smoke and ash from Evia, a rugged island of forests and coves close to the Greek mainland, blocked out the sun and turned the sky orange.

It is the most severe of hundreds in the past week across Greece.

The blaze destroyed pristine pine forests as well as homes and businesses and forced the evacuation of hundreds of people by sea.

Greece has been baked by its worst heat wave in three decades, with temperatures reaching 113 degrees.