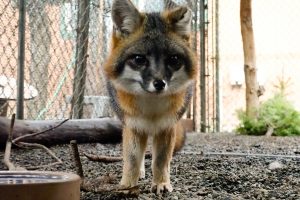 GRANTS PASS, Ore.– Wildlife Images has a foxy new friend to introduce after rescuing it from what the non-profit’s calling a harmful situation.

Cheveyo, a 3-year-old grey fox, was confiscated by California Fish and Wildlife at a home in Redding after discovering the animal was being illegally kept and locked in a small cage of its own urine and feces.

When they brought the fox to the veterinarian clinic, it was found that he had a fungal infection in his lungs that will require treatment for the rest of his life. Turtle Bay Exploration Park was caring for the young fox initially but Wildlife Images will now be his permanent residence where he will become an Animal Ambassador.

Dave Siddon says they’ve taken care of foxes before and Cheveyo will make a great addition to teach more people about wild animals. Siddon pointed out that while applications and permits can be given to keep foxes as pets in most states, there are strict requirements and even then they don’t encourage keeping wild animals as pets.

“They like to be outside all the time and most pets spend most of their time in the house,” said Siddon. “Again pungent urination, they scent mark everything around them constantly and pushed into a corner or something goes wrong it’ll bite.”

Unfortunately, the 3-year-old fox can’t be released back into the wild. The non-profit hopes he will be able to travel with other animals to teach people the importance of foxes in the ecosystem.