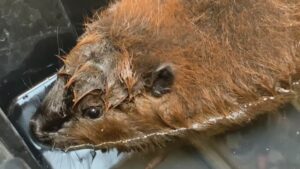 Executive director, Dave Siddon, says she was brought to them on July 8 after she was found without a mother.

He says she started off at the clinic drinking milk but has since started eating solid foods.

Siddon says it’s been at least 20 years since they’ve had a baby beaver in the clinic.

“It’s always nice to have a new face, something that you’ve never worked with before and of course everyone in our clinic, this is the first beaver they’ve ever worked with so of course its a big deal for them.”

Siddon says the baby girl will stay at the park for close to a year. He says that’s when she will likely have the skills she needs to make it on her own in the wild.