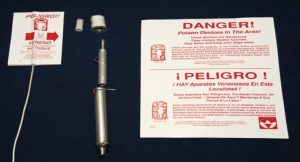 The Oregon Department of Fish and Wildlife wrote in a press release wolf OR48, part of the Shamrock Pack, died after encountering an “M-44” device, which is described as spring-activated device containing cyanide powder.

The intended purpose of the device is to control coyotes and prevent coyote-livestock conflict on private lands in northeast Oregon.

“The death of this wolf shows the risk involved when wolves are in areas where Wildlife Services conducts these types of operations,” said Doug Cottam, ODFW Wildlife Division administrator. “This is a situation we take seriously and we’ll be working with Wildlife Services with the goal of preventing it from happening again.”

USDA Wildlife Services in Oregon said they have initiated an internal review of the incident to see if any changes to current procedures are warranted.

ODFW said OR48 was collared on February 10, 2017. At the time of the collaring, he was estimated to be 2-years-old and weighed 100 pounds. He was not the breeding male of the Shamrock Pack.