Donations can be made online at United Way of Jackson County or by texting FIREFUND to 26989.
Home
Local
News
Top Stories
Wolf illegally killed near Klamath Falls 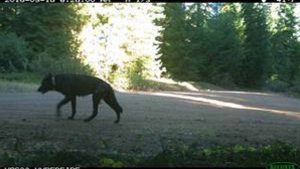 PORTLAND, Ore. – A $5,000 dollar reward is being offered for information on the poaching of a gray wolf near Klamath Falls.

The Oregon Department of Fish and Wildlife said on April 23, a the body of a male gray wolf–later identified at wolf OR-33–was found about 20 miles northwest of Klamath Falls in the Fremont-Winema National Forest.

The carcass was sent to a wildlife forensic lab in Ashland for a necropsy. It was determined the wolf died from gunshot wounds. Officials don’t have an estimated time of when it was killed.

OR-33 left the Imnaha Pack located in northeastern Oregon in November, 2015. He was not known to be a part of any pack at the time he was killed. The four-year-old wolf was collared, but it quit transmitting about a year ago.

Officials are still looking for information on the illegal killing of another wolf in the Fremont-Winema National Forest after female wolf OR-28 was found dead in October, 2016.