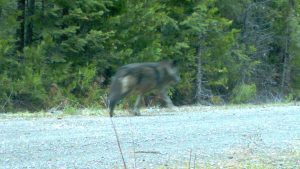 Remote camera photo of a wolf roaming the same area as OR7, now a member of the Rogue Pack.

The Oregon Department of Fish and Wildlife said on the morning of October 18, a ranch hand found a dead 5-month-old calf in a pasture between Butte Falls and Mt. McLoughlin.

ODFW investigated the incident and determined the death was the result of wolf depredation from the Rogue Pack, which roams between eastern Jackson County and western Klamath County. They believe the calf was attacked about 12 hours before it was found.

The morning after the discovery, another calf was found dead in the same area. It’s also believed to have been attacked by Rogue Pack wolves about 12 hours before it was found.

ODFW actively works with livestock producers in southwestern Oregon to mitigate wolf attacks. “Unfortunately, in Jackson County and in Klamath County the Rogue Pack has really found a way to kill cattle and we have seen quite an increase over 2018 in the amount of animals the Rogue Pack is responsible for killing,” said Steve Niemela with ODFW.

The goal of ODFW is to conserve the population of gray wolves while balancing it with the social and economic interests of Oregonians.

You can read more about how ODFW plans on dealing with the increasing wolf population here: https://www.dfw.state.or.us/Wolves/docs/2019_Oregon_Wolf_Plan.pdf