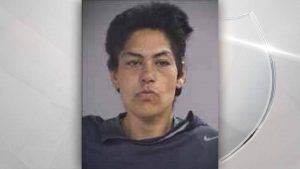 JACKSON COUNTY, Ore. – A woman was arrested after leading police on a chase through two Southern Oregon counties.

The Jackson County Sheriff’s Office said on the afternoon of May 20, the Grants Pass Department of Public Safety asked local law enforcement agencies to be on the lookout for a stolen silver Toyota Rav-4. Inside the vehicle was a .22 caliber rifle and a dog belonging to the car’s owner.

Investigators said the driver wouldn’t stop for police and intentionally drove the Rav-4 toward an officer.

At about 5:40 p.m., a jogger north of Gold Hill was reportedly contacted by a driver fitting the description of the suspect, identified at the time as a Hispanic woman. According to the jogger, the driver insisted she take the dog that was in the vehicle before driving away.

The suspect, identified as 33-year-old Laura Ashley De Los Santos, was lodged in the Jackson County Jail on charges of attempting to elude, reckless driving, and possession of a stolen vehicle. More charges are expected to be filed in Josephine County.

The sheriff’s office said this is just one of three chases that happened Wednesday around the same time. One was in the West Evans Creek Area in Josephine County and the other happened at about 9:30 p.m. It involved a green BMW that fled toward Medford and possibly back toward White City.

“Vehicles that attempt to elude are an extreme hazard to the citizens of the county,” the Jackson County Sheriff’s Office said. “JCSO asks that if you have any information on suspects who have eluded to please contact us.”