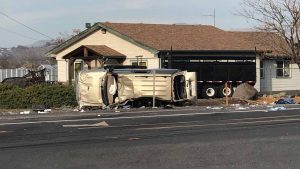 On Tuesday afternoon, a gold Ford Explorer driven by 25-year-old Enrique Hames of Argentina was traveling northbound Kershaw Road. As he was approaching the intersection with Highway 140, Hames failed to stop at a stop sign. A motorhome traveling eastbound on the highway collided with the SUV as it was crossing the roadway.

Hames and one of his passengers, a 24-year-old woman from Argentina, were taken to the hospital with serious injuries while the driver of the motorhome received minor injuries.

Hames’ other passenger, 26-year-old Cristina Hernandez Selles from Spain, was pronounced dead at the scene.

Highway 140 was closed between Crater Lake Highway and Riley Road. Motorists were advised to use an alternate route as police investigate the crash. The highway reopened just before 5:00 p.m.

The location of the crash is known as an especially dangerous portion of Highway 140, with numerous fatal crashes over the last few years.

The Oregon Department of Transportation has plans to install a roundabout west of Kershaw Road and close the current intersection to avoid similar crashes in the future.