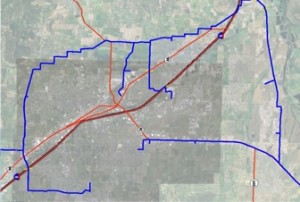 Medford, Ore. — Crews are wrapping up a near 6 month gas-line project in East Medford. They’re linking gas lines that feed that part of the city on Pierce Road. It’s the largest project they’ve completed since natural gas was first brought to the Rogue Valley in the 60’s.

“I don’t expect that we’ll have a project of this size for another 50 years,” Oregon Regional Business Manager, Steve Vincent says, “this arterial on the east side of Medford should serve growing needs for probably 50 years to come.”

Weather permitting they’ll start paving on Monday in hopes that work will be completed in 2 weeks.