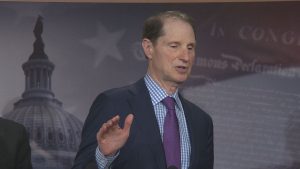 In a speech on the Senate floor, Wyden spoke about preserving net neutrality, stressing the importance of high-speed internet access for rural Oregonians.

“The fight for a free and open Internet will not end with today’s shortsighted and misguided net neutrality decision by Trump appointees,” he said. “I will fight this decision in the courts and in the Congress.”

Wyden, along with 15 other senators, announced their plan to introduce a Congressional Review Act resolution. The legislation would restore the 2015 rules.