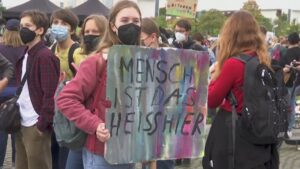 (NBC) Thousands of young activists staged massive protests all over the world Thursday to demand climate change action for politicians.

In Germany, activists gathered in front of the parliament in Berlin. Swedish teen activist Greta Thunberg joined the protest two days before the German election in which climate change has been a major topic.

In Italy, hundreds of protesters flooded the streets in Rome to make a stand against climate change. Protesters met in a central square in Rome and marched with flags and banners through the heart of the city.

The issue has risen up the political agenda in many countries amid warnings from scientists that the world is heading towards dangerous temperature rises unless greenhouse gas emissions are cut sharply in the coming years.

Global climate protests were muted during the coronavirus pandemic due to restrictions on public gatherings but with many countries relaxing rules again, thousands hit the streets in many large cities.