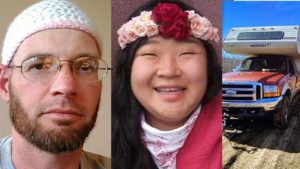 HUMBOLDT COUNTY, Calif. — The Humboldt County Sheriff’s Office is searching for a kidnapping suspect, who they say could be armed and dangerous.

43-year-old George Rose was last seen in the Orleans area with kidnapping victim, 27-year-old Joy Hong of Fieldbrook, according to police. The sheriff’s office believes the two are traveling in a burnt orange 1999 Ford F-350, California License plate number 5T93690.

Allegedly, Rose forced entry into a residence while armed on the 1600 block of Fieldbrook Road in Fieldbrook, Monday evening between 5:30 and 7:30 p.m. According to police, he forced three residents, including Hong, into a vehicle and fled.  Police say, Rose knew the residents.

A roommate of Hong’s returned home later Tuesday evening and reported the residents missing, along with several items and her car.

At some point, police say Rose left two victims in the Orleans area and fled with Hong. Police say the two victims are safe.

The Humboldt County Sheriff’s Office asks if anyone sees Rose, to call 911 immediately. If anyone has information, call the sheriff’s office: (707) 445-7251