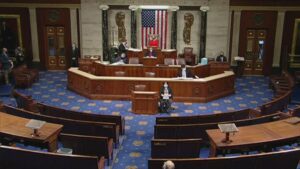 WASHINGTON, D.C. (NBC) – House Speaker Nancy Pelosi said Democrats will vote Monday on a stand-alone bill that would provide two thousand dollar direct payments to most Americans. Her announcement comes moments after Democrats tried to approve the payments the same day by unanimous consent on the House floor.

House Minority Leader Kevin McCarthy, who was not present, blocked it.

Democrats are siding with president trump on this issue.

The president said he will veto the COVID relief bill if direct payments aren’t increased. But the bill also includes an extension of government funding.

“Believe it or not, Democrats agree with the president, at least to the extent that we need to sign this bill now,” House Majority Leader Steny Hoyer (D-MD) said.

If the president doesn’t sign the bill, current funding runs out at the end of the day on Monday, December 28th and there could be a partial government shut down.