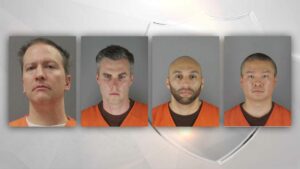 Chauvin, Thao and Kueng are charged with violating Floyd’s right to be free.

All four officers are charged for failing to provide Floyd with medical care.

Chauvin is also charged in a second indictment, stemming from the arrest and neck restraint of a 14-year-old boy in 2017.