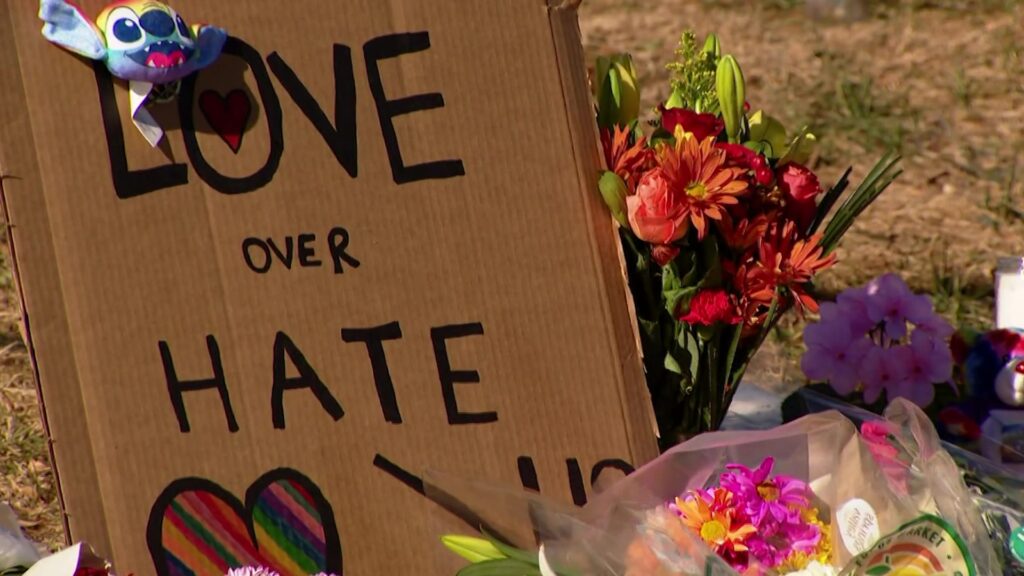 COLORADO SPRING, Colo. (KUSA/CNN) – At least five people are dead and 25 more injured after a shooting erupted inside a Colorado LGBTQ club just before midnight Saturday.

A sign expressing “Love Over Hate” now sits amongst a growing memorial of flowers, mementos and notes outside of Club Q in Colorado Springs.

A night of letting loose turned to tragedy late Saturday after a deadly shooting has now rocked the city’s tight-knit LGBTQ community.

Joshua Thurman was inside Club Q when he heard gunshots. “It was so scary,” Thurman said. “I heard gunshots, broken glass, bodies.”

Michael Anderson was bartending when the shooting erupted. “There was a moment in time where I feared I was not going to make it out of that club alive,” Anderson said. “And I have never prayed so sincerely and quickly in my life, as I did in that moment.”

President Biden responded to the attack in a statement referencing the 2016 massacre at Pulse Night Club in Orlando. He said, “While no motive in this attack is yet clear, we know that the LGBTQI+ community has been subjected to horrific hate violence in recent years. We saw it six years ago in Orlando when our nation suffered the deadliest attack affecting the LGBTQI+ community in American history.”

The FBI is now assisting local authorities who are investigating the shooting as a possible hate crime.

“I think it’s fair to say based on the facts, it’s very hard to conceive a situation where the motive wasn’t generated by hate,” said Colorado Attorney General Phil Weiser.