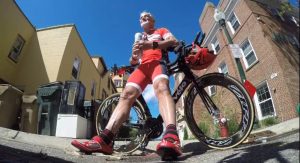 Nearly fifty years ago, Lon was a student at the University of Wisconsin. He graduated in 1967. He looks back at on all the fond memories, “I dated a girl that was an Alpha Phi.” And cherishes the time he lived in his fraternity, Sigma Chi, “When I was here it was during the Vietnam War.”

But what he is thankful for the most, were the moments as a Madison wrestler. He said, “It was a great experience. I wouldn’t change it for anything, wrestling taught me a lot.”

He said training for a triathlon was nothing like he’s ever done before, “It is a much more sophisticated sport. You have to pace yourself. You have to learn how to go long distances over periods of time.”

This is his first full triathlon. “Why would I choose this as my first Ironman? That’s because it’s Madison, if figured if I looked around and saw things it would motivate me.”

With Madison as motivation, he says his age won’t hold him back, “My goal is to not win it, it’s to finish it.”