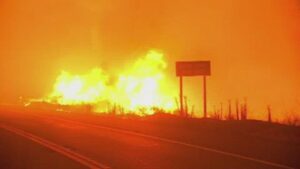 Charges include one felony count of involuntary manslaughter and other felony and misdemeanor counts related to the fire.

The fire was sparked on September 5, 2020, when the couple and their young children staged a baby gender reveal at El Dorado Ranch Park in Yucaipa.

A smoke-generating pyrotechnic device was set off in a field igniting dry grass. The couple tried to use bottled water to extinguish the flames and called 9-1-1.

Thirteen other people were injured and hundreds of residents were evacuated.

The couple is due back in court on September 15th.