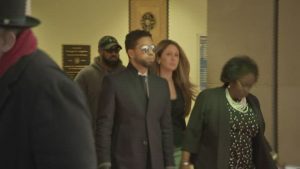 CHICAGO, Ill. (NBC) – Charges against Jussie Smollett have been dropped.

Prosecutors in Chicago dropped all charges against the “Empire” actor just weeks after he was indicted on 16 felony counts related to making a false report that he was attacked by two men.

Smollett’s attorneys say that his record has been “wiped clean”.

During a brief news conference, Smollett said he has been truthful from the beginning and that he was not capable of doing what he was accused of.

“I want you to know that not for a moment was it in vain,” Smollett said. “I’ve been truthful and consistent on every single level since day one. I would not be my mother’s son if I was capable of one drop of what I’ve been accused of. This has been an incredibly difficult time… honestly one of the worst of my entire life. But I am a man of faith, I’m a man who has knowledge of my history… and I would not bring my families, our lives or the movement through a fire like this. I just wouldn’t.”