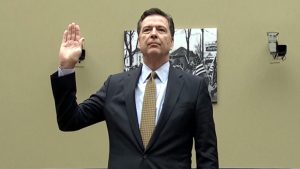 They want to know why he recommended no charges against Hillary Clinton for handling classified information on her personal email servers.

“At the end the day people can disagree, can agree. They will at least understand how the decision was made. The recommendation was made the way you want it to be,” Comey says.

Attorney General Loretta Lynch says she accepted the unanimous decision from the FBI Director as well as the agents and prosecutors assigned to the case, not to charge Clinton.

Republicans on the oversight committee pressed Comey, and the line of questioning fell along party lines.

“I think there is a legitimate concern that there is a double standard,” Rep. Jason Chaffetz, Chairman of the House Oversight Committee says.

Attorney General Loretta Lynch will answer the same questions as Comey in front of another house committee next week.