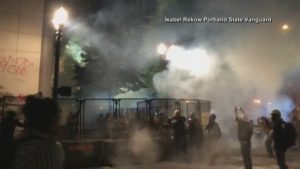 PORTLAND, Ore. – President Donald Trump is calling out Oregon’s governor after she announced the alleged phased withdrawal of federal officers in Portland.

In a news release Wednesday morning, Governor Kate Brown said Trump administration officials have agreed to her “demand” that federal officers from Customs and Border Protection and ICE will leave downtown Portland starting Thursday. “These federal officers have acted as an occupying force, refused accountability, and brought violence and strife to our community,” Brown said. She added the “departure of federal forces” is “overdue.”

According to Brown, local officers will take over protecting the Mark O. Hatfield Federal Courthouse, which has long been the epicenter of protests in the wake of the killing of George Floyd.

However, acting Department of Homeland Security Secretary Chad Wolf had a conflicting message, saying all officers would not be leaving right away. He said they’ll remain until the governor can prove local officers can handle the job. “The Department will continue to maintain our current, augmented federal law enforcement personnel in Portland until we are assured that the Hatfield Federal Courthouse and other federal facilities will no longer be attacked and that the seat of justice in Portland will remain secure,” Wolf said.

On Thursday morning, the president himself made a similar statement on Twitter. “Kate Brown, Governor of Oregon, isn’t doing her job,” Trump said. “She must clear out, and in some cases arrest, the Anarchists & Agitators in Portland. If she can’t do it, the Federal Government will do it for her. We will not be leaving until there is safety!”

The president’s tweet was followed by one made by Governor Brown. “I think we’ve had enough political grandstanding from DC,” she said. “The President’s plan to ‘dominate’ the streets of American cities has failed. And today [Thursday], federal troops are preparing to leave downtown Portland. We will protect free speech and the right to protest peacefully.”

Thursday night is widely expected to mark the 64th day of protests outside the federal courthouse in Portland.