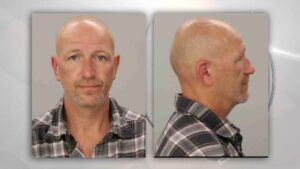 The Coos County Sheriff’s Office said Robert Elliot Danford was found and arrested after police received a tip from a citizen just 2.5 hours after deputies put out a request for assistance.

No further information was provided.

Original story: COOS COUNTY, Ore. – A North Bend man is reportedly on the run after he allegedly tried to kill his ex-girlfriend.

Deputies said Danford, who had a restraining order against him designed to keep him away from his ex-girlfriend, beat her and bludgeoned her before she was able to escape into the woods at South Slough National Estuarine Reserve. There, she hid for several hours with significant injuries to her face, eyes, neck, and brain.

Eventually, she came across someone who was able to call 9-1-1 on her behalf. She was flown to a nearby hospital for treatment before being transferred to a hospital in Eugene.

After the incident, deputies searched the area for Danford, who at one point was armed with a knife. However, they weren’t able to find him.

Investigators said Danford was last seen in the reserve wearing a black leather jacket, jeans, and a pair of black Crocs.

Danford is wanted for attempted murder, kidnapping and assault. He is considered armed and extremely dangerous. Do not attempt to approach him. Instead, call 9-1-1.