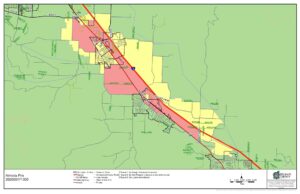 TALENT, Ore. – Some people living in a Talent neighborhood can return home after being evacuated due to the Almeda Fire.

On Thursday, Jackson County Emergency Management said residents of the Anjou Club community are now under a Level 2 evacuation notice, downgraded from a Level 3 notice. Nearby properties on Poppy Way, Clearview, and Winter Sage were similarly downgraded. Those neighborhoods can be accessed through Colver Road to Suncrest Road or via Talent Avenue to West Main and West Valley View Road.

The downgrades come a day after some Phoenix neighborhoods reopened. They include the following areas:

The homes and businesses in the above areas must be accessed by First and Fourth Streets to the west. They can’t be reached from Highway 99.

Portions of Phoenix and Talent remain on Level 3 evacuation notices and people are being told to keep out of those areas.