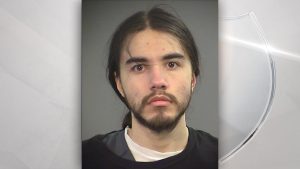 MEDFORD, Ore. –A man was found guilty in connection with a fatal shooting that happened in 2018.

According to the Medford Police Department, on the morning of January 27, 2018, two people called 911 to report an assault with a weapon. The incident reportedly happened at an apartment in the 800 block of Ellendale Avenue.

When police arrived at the scene, they found four people inside the apartment. One of them, 39-year-old Thomas Allen Peterson, had been shot in the head. He was taken to the hospital where he later died.

Officers said they determined Cody Templeton was responsible for the shooting.

Templeton was lodged in the Jackson County Jail on one count of attempted murder and one count of assault. A murder charge was added after Peterson died.

On November 13, 2020, Templeton was found guilty of manslaughter in the first degree. He found not guilty of murder.

Sentencing has been postponed pending a pre-sentencing report and a possible hearing.