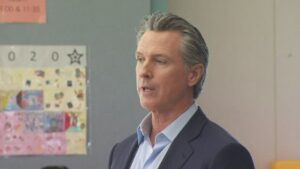 Recall organizers must submit just short of 1.5 million valid signatures, or 12% of the vote total in the 2018 California gubernatorial election.

If the signatures are verified a recall election will take place later this year.

Governor Newsom said he’s ready to fight the effort, painting many recall supporters as extremists supported by conservative groups from outside of California.

“You look at the original sponsors of it,” Newsom said. “You have a member, a proud member, of the 3 Percenters, an alt-right militia group.  Others that are devout conspiracy theorists, that believe in QAnon. Another that literally supported the insurrection, supported it on January 6th. That’s the group.”

The only successful recall of a California governor out of the more 50 attempts made was in 2003 when Governor Gray Davis was removed from office.

Newsom and his allies have begun to enlist national progressives such as Senators Bernie Sanders and Elizabeth Warren, to support him and have produced an ad targeting his opponents as out of the mainstream.