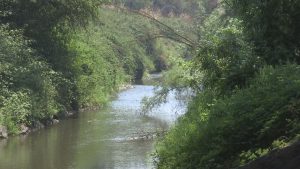 MEDFORD, Ore.– Cities and agencies managing the Bear Creek Greenway constantly battle the question of how do you keep it safe from fires and still maintain a lush environment for the public.

With three fires in little more than a week at various points along the Greenway, the most recent one in Central Point has some locals frustrated.

“Just trim everything back a little and definitely get rid of the sticker bushes,” said Sean McDaniel, a resident. “When that gets all dried out that’s gonna ignite almost as quick as the grass.”

Those so called “sticker bushes” – blackberries, briars, thorns and the like – are a hazard that those who maintain the Greenway are well aware of.

But there are other concerns as well.

Perhaps the biggest problem though is the Greenway traverses city and county boundaries including Ashland, Medford, Central Point and Jackson County to name a few.

“Each of the cities and the county works together and somewhat independently on seeking those grants to try to clean those things up,” said Vial.

However, budgeting to maintain the Greenway is not an easy task.

“The city is actively looking for grants especially parks and recreation for a lot of the stuff they do,” said Medford Fire and Rescue Chief Brian Fish. “They’re out seeking those and whether it’s for that specific or something else, they’re always looking for opportunities.”

It can cost millions each year to continually manage and like the blackberry, these are problems that keep coming back.

“It’s an ongoing effort to kind of, to keep that area safe and viable,” said Fish.

But there are perhaps solutions that can be solved by locals willing to help. Last September, Medford in partnership with the Oregon Stewardship removed nearly three acres of blackberry bramble along the Greenway. The stewardship also planted native vegetation which Chief Fish says is an important step in managing the area to prevent fires.

“Either take care of the roots or plant native vegetation that will be not as invasive,” he said. “We’ve had some instances where we had people come in with volunteers that have done that.”

Medford partnership is part of a riparian restoration effort and the result of special project funding for the next two years.

The parks and recreation department received $45,000 for each year to fund projects that would remove non-native vegetation on City-owned portions of the Greenway. As things move forward, this is one step towards protecting the Greenway and residences around it from fires.

Currently, law enforcement and fire crews will still maintain a careful eye on as much of the area as possible but with only so many resources, it can be difficult to get enough time to constantly clean and manage it.