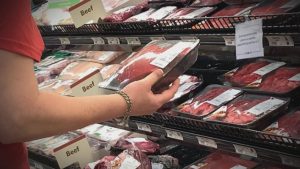 MEDFORD, Ore.– Shoppers across the country are facing sticker shock at the grocery store.

Since the COVID-19 crisis began, certain foods have gone up in price as supply chains become more strained. It’s in part because as the pandemic sickens workers and forces factories to close, it hits the wallets of the American shopper.

The Washington Post says food prices are rising at a pace faster than they have in the last decade. Since February, supply chains have been hit hard especially during the first couple months of the pandemic. Some industries have managed to get things running again but many companies are still seeing a decrease in production levels.

Medford resident Bella Flores says she felt the shock when she recently went to the store to pick up her monthly items.

Flores says she has a family with five mouths to feed including her one-year-old son meaning every dollar has to count. She’s been laid off from work and says their source of income is coming from her parents.

“We’re definitely penny-pinching a lot,” she said. “So we use all the food up until we’re able to. But because I have a baby I am spending a little more on his snacks.”

According to the Bureau of Economic Analysis, nearly every category of food has become more expensive since February. Items like beef have spiked 20 percent and eggs have risen 10 percent.
Compared to the same time last year, the numbers are still high.

The Urban Institute ran a study in May and found that one in six adults and one in five with children experienced food insecurity.

Flores says she’s budgeted about $300 for a whole month’s worth of food. Most times she shops at bulk item stores like Costco and fills in the rest at smaller local stores. While she tries to stay in that budget, it’s getting harder to do so.

She says they’ve managed so far and they’ll continue to manage in the future but it’s certainly not getting easier. Her story isn’t alone though.

In a quick poll on NBC5 News Facebook page, we asked our viewers if they’ve noticed their grocery bill rise. As of Wednesday evening, nearly 90 percent of respondents said they’ve seen their bills go up.

“Things are getting expensive and it’s tough. It’s tough for everyone,” said Flores.