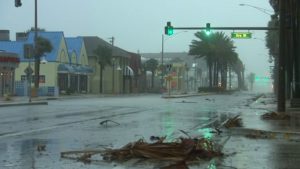 Sunrise showed no slow-down in Hurricane Matthew’s assault on the Sunshine State.

“This is not over,” Florida Governor Rick Scott warned residents.

The eye is still expected to move dangerously close to shore as the storm marches northward along Florida’s east coast, bringing the heaviest rains at high tide and raising the risk of catastrophic storm surge.

So far one death has been reported by Florida authorities, and tens of thousands are without power.

Matthew is forecasted to skirt the coasts of Georgia and South Carolina as it slowly pushes north over the weekend.

Still, meteorologists are reminding everyone that off shore does not mean any less dangerous.