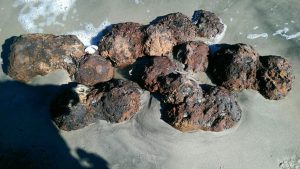 Charleston, S.C. (CNN) — After Hurricane Matthew made its way up the coast, officials in South Carolina made an explosive discovery along state’s shore.

The age-old ordinance was discovered by the city’s former mayor, who was walking along the beach when he spotted the rocky-looking cannonballs, fused together by rust.

County bomb squad and US Air Force officials responded and confirmed the ordinance.

Removing and detonating most of the find, with the rest going to a nearby naval base.