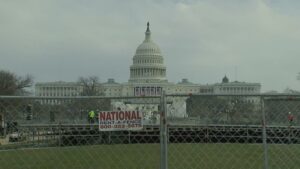 With miles of security fencing going up and streets barricaded, the National Mall where hundreds of thousands usually gather for the inauguration has been shut down in the wake of the deadly pro-Trump riot at the U.S. Capitol.

“I’m sad about it, I have to tell you, that it looks that way. I’m committed to make sure that we get our city back,” D.C. Mayor Muriel Bowser said Friday.

Federal agents continue to monitor threats of violence from right-wing extremists, and internet chatter suggests Washington may not be the only target.

Security is being tightened at state capitols across the country after warnings about armed protesters gathering through the weekend.