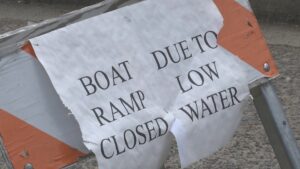 According to director John Vial, Emigrant lake is the lowest its been in the last five years for this time of the year.

Here’s a breakdown of water levels on August 18th over the last five years:

Right now, water levels at the lake are dropping an average of six feet a week.

“There are many years that we go the entire season with boat ramps that are usable all summer long,” John Vial said. “That’s not uncommon and then there’s a year like this year when we run out early.”

Other lakes in the county facing similar problems include Howard Prairie and Hyatt Lake.